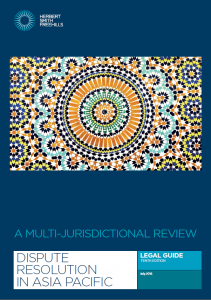 Please click here to preview this publication.  To request a copy of the guide, please email asia.publications@hsf.com.

Amongst the range of topics addressed in the Guide, we asked local counsel whether parties to litigation or arbitration are required to consider or submit to ADR procedures before or during proceedings. We will feature the responses of the various jurisdictions in upcoming posts and cover our first five jurisdictions (Australia, Bangladesh, China, Hong Kong and India) below.

Federal legislation requires parties to certain proceedings commenced in the Federal Court and Federal Circuit Court to take genuine steps to resolve disputes before civil proceedings are instituted. Taking genuine steps includes alternative dispute resolution processes, of which mediation is one of the most common. However, it should be noted that the legislation does not go so far as to require that alternative dispute resolution processes take place; only that they are sincerely and genuinely considered as a method of resolution. At the state level, similar legislation only exists in South Australia. There, plaintiffs must notify defendants of prospective claims before commencing proceedings and must accompany the notice with a settlement offer.

Legislation also exists both federally and in each state which grant courts the power to refer proceedings to mediation, with or without the consent of the parties.  Some specific legislation also creates mandatory alternative dispute resolution obligations. For example, in some circumstances, parties to proceedings in the New South Wales Civil and Administrative Tribunal are required to attempt mediation prior to the proceedings.

Section 89A of the Code of Civil Procedure provides for mediation in order to settle disputes in civil suits at an early stage of proceedings. However, a court cannot force a party to enter into mediation.

The Arbitration Act 2001 provides that it shall not be incompatible for an arbitral tribunal to encourage settlement of disputes otherwise than by arbitration.

Although the judge may ask the parties whether they are willing to settle prior to making a judgment, parties are not required to agree to mediation. In the employment and matrimonial contexts, however, mediation is compulsory.

Although there is generally no obligation upon parties to mediate, the procedural rules encourage parties to consider mediation and the courts have a duty to facilitate mediation where appropriate. Where a party refuses to engage in mediation and that refusal is unreasonable, the court may penalise that party by making an adverse costs order.

For the purpose of this requirement, ie the duty to consider mediation, it is not sufficient to simply enter into settlement negotiations. Mediation involves the appointment of a trained and impartial third party (a mediator) whose main function is to facilitate communication and agreement between the parties. A mediator does not make rulings on the matters in dispute between the parties.

Where a party wishes to mediate after proceedings have commenced they are required to serve a Mediation Notice on the other party or parties setting out details of the proposed mediation. The recipient(s) of such a notice have 14 days to respond and to state whether they agree to mediation, and if not provide reasons for their disagreement. The parties must also file a Mediation Certificate at the same time as filing the timetabling questionnaire, signed by the solicitors and the parties they represent. The certificate needs to state whether a party is willing to attempt mediation and, if not, the reasons why not. Where the parties have agreed to mediate the court will stay the proceedings to allow for the mediation to proceed.

All information exchanged and any admissions made during the mediation process are strictly confidential and covered by "without prejudice" privilege and may not be relied upon in court. The confidentiality of "mediation communications" has recently been put on a statutory footing in the Mediation Ordinance which came into force on 1 January 2013.

There is a special scheme in place in relation to monetary disputes between individual consumers and financial institutions of a value of up to HK$500,000. The scheme which was introduced in June 2012 is run by the Financial Dispute Resolution Centre (FDRC). In accordance with the scheme rules financial institutions are required to enter into mediation (and if the mediation fails arbitration) if the dispute cannot be resolved directly between the parties and if the consumer so wishes.

Parties to arbitration may be contractually bound to submit their dispute to mediation first, if the dispute resolution clause contains a sufficiently certain obligation to mediate in which case the arbitration tribunal may stay proceedings pending conclusion of the mediation.

Courts are empowered to direct parties to a litigation to consider alternative dispute resolution. However, there are no rules which compel parties to undertake this course of action. Section 89 of the Code of Civil Procedure provides that where it appears to the court that there exist elements of a settlement which may be acceptable to the parties, the court shall formulate the terms of settlement and give them to the parties for their consideration, based on which the court may formulate the terms of a possible settlement and refer the matter to arbitration, conciliation, judicial settlement (including settlement through Lok Adalat), or mediation.

Another method of alternative dispute resolution can be undertaken through the Lok Adalats association (provided under section 19 of the Legal Services Authorities Act 1987). Lok Adalats may settle disputes between parties and make awards.