Herbert Smith Freehills South Africa lawyer, Plaxedes Makura, has been recognised for the fourth consecutive year for her contribution to progressing gender equality and diversity on the HERoes Female Future Leaders list. Makura is a manager in the firm’s Alternative Legal Services (ALT) team, based in its Johannesburg office.

Announced in London on 9 September, these global lists recognise female leaders who inspire and drive gender equality within their organisations and professions. The HERoes Women Role Model Lists 2021 is supported by Yahoo Finance and INvolve, a global organisation championing diversity and inclusion in business and working across ethnic minority, LGBT+ and gender diversity.

Plaxedes is an experienced disputes lawyer in the Alternative Legal Services (ALT) team at Herbert Smith Freehills. She was integrally involved in setting up the Johannesburg ALT team in 2017, which forms part of a market-leading, innovative global team of 350 lawyers, technologists and legal analysts operating across 11 international locations.

As well as serving on the Johannesburg Pro Bono Committee and the Regional Race Champions Committee, Plaxedes was instrumental in setting up the Social, Diversity, CSR and Mental Health Committees. In addition to managing complex cross-jurisdictional international disputes projects, Plaxedes’ responsibilities include the recruitment of legal analysts as part of the pioneering International Legal Development Programme.

When recruiting, Plaxedes ensures that she and her colleagues are championing individual uniqueness, and that the teams they recruit are diverse. As a result, more than half of the legal analysts recruited in January 2021 were women.

Outside of work, Plaxedes has raised funds for a breast cancer patient who could not afford treatment and for a biokinetics student to be able to register for her second year of studies.

Plaxedes Makura says: “I am proud to work for a firm that places such great emphasis on diversity, inclusivity and equality in the workplace. My position within the management team has enabled me to play an active role in establishing committees and networks that strive to make the firm welcoming and inclusive, not only for women but for all employees. My philosophy is to foster an inclusive business culture that champions individual uniqueness.”

Vanessa Kingsmill, Head of ALT at Herbert Smith Freehills Johannesburg says: “I am delighted to see Plaxedes recognised as a future leader and role model for women across our business and the legal profession. I take great pride in the work we are doing at Herbert Smith Freehills to build an ever-growing inclusive culture and her contribution to that has been significant.”

The list is now in its fifth year and comprises three categories – Women Executives, Women Future Leaders and Advocate Executives. These lists recognise women who are leading by example and driving change alongside male advocates who create a more diverse and inclusive business environment for women. 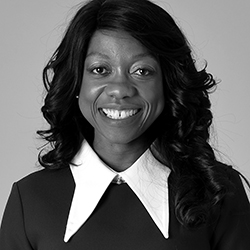