The London Maritime Arbitrators Association (“LMAA”) have now released their latest statistics on ad hoc arbitrations conducted under the LMAA Terms and Procedures. The latest figures reveal that, in the wake of the disruption caused by the Covid-19 pandemic, ad-hoc arbitration in London is continuing to thrive.

Despite the pandemic the number of awards produced in 2020 was largely in line with 2019, with 523 arbitral awards produced by LMAA arbitrators in 2020. There was a small decline in the number of awards when compared with 2019 (6 fewer awards were issued in 2020 than in the previous year) which the LMAA attributed to the fact that “many cases experienced some element of delay during the first half of 2020”, which saw the start of the Covid-19 pandemic. The LMAA has observed that some awards that would otherwise have been issued in the second half of 2020 were pushed back into early 2021. The LMAA also reported a slight decline in the number of awards issued following an oral hearing, which was to be expected given the slight decline in awards, and the fact that most LMAA arbitrations are conducted on written submissions alone, even in normal years. 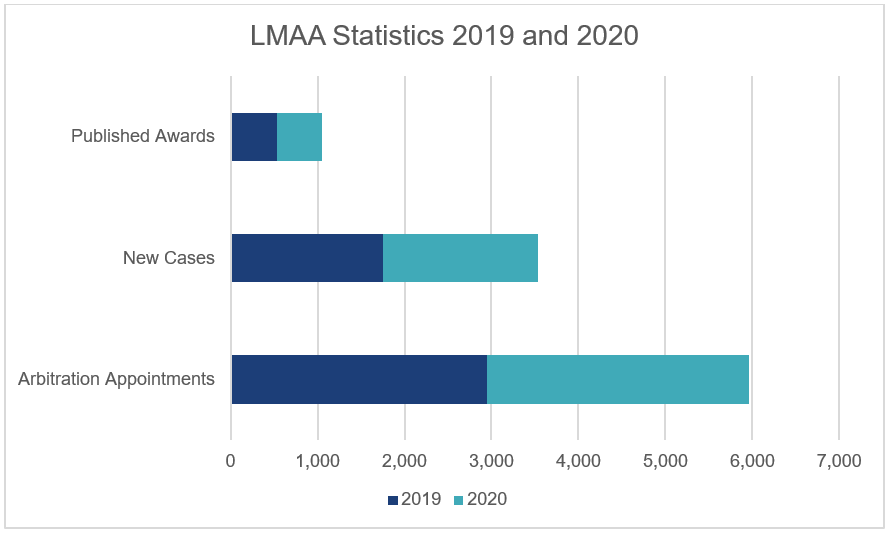 The LMAA’s increased number of new cases in 2020 is in line with the experience of a number of the leading arbitral institutions which have already released 2020 caseload figures. The latest statistics from the leading arbitral institutions reveal that institutional arbitration, like ad-hoc arbitration, thrived throughout 2020. The LCIA reported an all-time highest number of new cases in 2020, with 444 referrals (including 407 LCIA Rules Arbitrations), amounting to a 10% increase on 2019’s numbers. The ICC (which reported 946 new arbitrations, beating 2016’s record) and HKIAC (reporting 311 new filings) also saw their highest number of new arbitrations in 2020. The SCC had a similarly excellent performance, recording their highest caseload since 2009 (and second highest ever caseload), with 213 new cases registered. 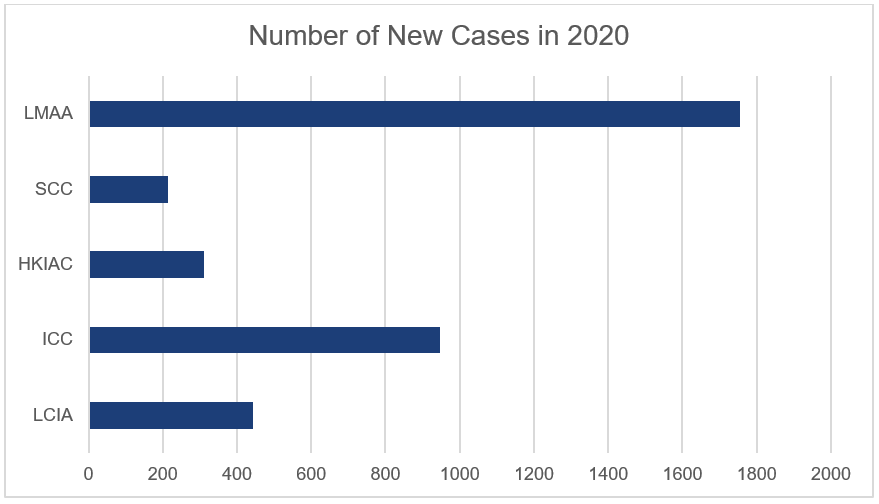 The impact of Halliburton?

Last year, the UK Supreme Court handed down its decision in Halliburton, which is now the leading English law case on arbitrator conflicts of interest (see our blog post on this decision here). The decision concerned a Bermuda Form ad hoc arbitration and has been of particular interest to the ad hoc community as it clarifies how the English law test for apparent bias applies in the context of ad hoc arbitrations in specialist sectors.

In its decision, the Supreme Court confirmed that arbitrators are under a duty to disclose facts and circumstances which would or might reasonably give rise to the appearance of bias, and that this might include disclosure of appointments in multiple overlapping references, dependent on the customs and practices of the relevant sector. On the facts of the case, the Supreme Court considered that in the Bermuda Form context the practice was to disclose such appointments.

This nuanced decision of the Supreme Court has been well received by users of ad hoc arbitration and takes into account the unique practice of specialist sectors. In many of the sectors which make heaviest use of ad hoc arbitration market participants recognise that given the relatively small group of specialised arbitrators, overlapping and repeat appoints are inevitable.

It is clear from the available data that ad hoc arbitration in London is continuing to thrive, despite the last year being marked by disruption as a result of the Covid-19 pandemic. The leading arbitral institutions are expected to release the full breakdown of their caseloads for 2020 within the coming months and these will likely reveal further insights into the volumes of ad hoc arbitration currently administered by these institutions, and the choice of London as a seat by commercial parties. We will report on these statistics once they are released.