It is unlawful for an employer to bypass collective bargaining by making an offer of new terms directly to individual trade union members where the main purpose of the offer is to set a term of employment other than by collective bargaining. The Court of Appeal has overturned the EAT decision in Kostal UK Ltd v Dunkley (see here) and held that this does not prevent an employer making a one off direct offer to workers to change a contractual term, provided that the employer’s sole or main purpose is not to take the relevant term outside of the scope of collective bargaining on a permanent basis. Leave to appeal is being sought.

Multi-employer bargaining is high on the ALP’s “to do” list if it wins the election, leading to speculation about the prospect of ‘industry bargaining’ under an ALP Government. The third article in our Federal Election series looks into industry bargaining. Click here to read our article by Special Counsel Heidi Fairhall. END_OF_DOCUMENT_TOKEN_TO_BE_REPLACED

We’re delighted to have launched our Australian Federal Election Reforms – IR Policy and the 2019 Federal Election hub. Look forward to weekly additions to this site focusing on the practical impacts for business in the face of the upcoming election.

This week, Rohan Doyle considers Enterprise Bargaining – if it’s ‘Broken’, is there a Fix Ahead?

Malaysia’s Ministry of Human Resources has recently proposed amendments to the Industrial Relations Act 1967 (“IRA”) which, if introduced, would result in, amongst others, significant changes to the dispute resolution regime for employment claims in Malaysia.

END_OF_DOCUMENT_TOKEN_TO_BE_REPLACED

Late on Wednesday 5 December 2018, the Fair Work Amendment (Repeal Four Yearly Review and Other Measures) Bill 2017 (Bill) was passed by both houses of Parliament The Bill received royal assent on 11 December 2018 creating a Commencement Date of 12 December 2018.

The Victorian state election on Saturday 24 November 2018 was characterised by large swings, with the Liberal party losing several previously safe seats and Premier Daniel Andrews successfully leading the ALP to a clear victory, having significantly increased its majority.

So what will this mean for businesses? END_OF_DOCUMENT_TOKEN_TO_BE_REPLACED

The ‘Trends in Federal Enterprise Bargaining’ report for October-December 2017 was released by the Department of Jobs and Small Business in the first week of May 2018.

If you have enterprise agreement negotiations coming up in 2018, this data may be useful for benchmarking.

END_OF_DOCUMENT_TOKEN_TO_BE_REPLACED

This week we launch the 2018 edition of Bargaining under the Fair Work Act and highlight findings from our recent Australian bargaining survey. Click here to discover more. 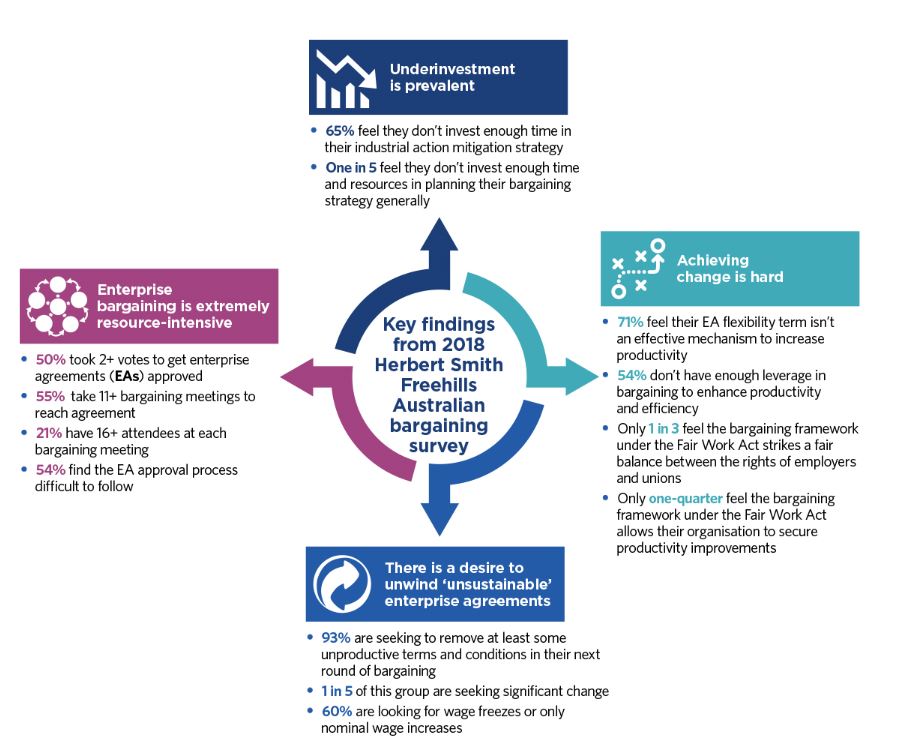 END_OF_DOCUMENT_TOKEN_TO_BE_REPLACED

The ‘Trends in Federal Enterprise Bargaining’ report for July-September 2017 was released by the Department of Employment on 10 January 2018.

If you have enterprise agreement negotiations coming up in 2018, this data can be useful for benchmarking.