The plastics economy and the future challenge for downstream producers 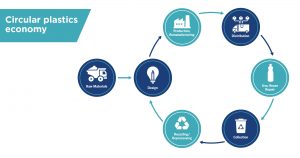 Increasing awareness of the environmental impacts caused by human consumption has led to increased societal pressure on governments and industry to modify practices to lessen their impact on the environment. One area this has occurred which is of particular concern to downstream market participants, is single use plastics. According to the United Nations, only 9% of all plastic waste ever produced has been recycled, about 12% has been incinerated, with the remaining 79% ending up in landfill or the environment. Pressure has therefore been mounting to ‘close the loop’ on plastics, meaning finding a sustainable way to either recycle or dispose of them.

Unfortunately, there is no simple solution to the issue as plastics remain an indispensable product and current recycling practices remain inadequate to deal with it with recycled products being of a lesser quality (resulting in what is referred to as ‘downcycling’). Furthermore with China’s ban in 2018 on accepting foreign waste for recycling, the lack of domestic recycling capacity in many countries was exposed.

Adding to the complexity of the issue has been the COVID-19 pandemic which has seen a huge demand for personal protective equipment, often made from single use plastics which has again increased demand for such plastics.

This note outlines some of the key industry and regulatory trends we are seeing in the market, along with the key opportunities we see for market participants.

Given the inefficiencies with current recycling practices, a major focus has been on creating more efficient recycling processes, or better disposal systems for plastics which prevent them ending up in the environment or landfill.

Another perhaps less explored solution to plastics disposal, pyrolysis also has potential. Pyrolsis, also referred to as “plastics to fuel”, turns plastics from solid waste into a synthetic crude oil. This can then be refined into diesel fuel, gasoline, heating oil or waxes. Unlike chemical recycling, pyrolysis does not create a recycled plastic, but rather an ultra-low sulphur diesel fuel which can reduce greenhouse gas emissions and save on traditional energy use as opposed to ultra-low sulphur diesel from conventional crude oil. Pyrolsis plants have already been constructed in Spain, South Korea, Thailand and Bulgaria to convert plastics to diesel or oil to produce plastic.

As these technologies have not been widely adopted, there is an opportunity for market participants to make early investments in this area as significant scale is required if they are going to become a solution.  Petrochemical companies may also consider integrating certain waste collection into their existing operations to ensure the quality of the plastic feedstock.

Many companies, under the pressure to reduce carbon emissions have already set ambitious reduction carbon reduction targets. For example, BP and Dow have set carbon neutrality targets by 2050. This pressure on market participants to reduce carbon emissions, has already led to a trend of downstream companies completing strategic acquisitions to ‘green-proof’ their business, usually in the form of acquiring a more environmentally friendly alternative, or a complimentary business further along the supply chain which allows for environmental synergies. One such example is Shell, which recently acquired Select Carbon, a carbon farming business to assist Shell’s customers offset their emissions that cannot be avoided.

This trend has already started to appear in the downstream sector in relation to plastics, with Mitsubishi Chemical Corporation acquiring two Swiss engineering plastics recyclers as part of the company’s efforts to promote the circular economy.

2.3 Changing consumer behaviour and the pressure on manufacturers

Many plastics manufacturers and brands such as Unilever, Procter & Gamble, PepsiCo and Danone have set goals to ensure all plastic packaging is reusable, recyclable or compostable. For example, Unilever has committed to reduce their virgin plastic packaging by 50% by 2025 with one third coming from an absolute plastic reduction. Likewise, PepsiCo has announced a target to reduced 35% of virgin plastic content across its beverage portfolio by 2025 by increasing its use of recycled content and alternative packaging, and Proctor & Gamble has committed to using 100% recyclable or reusable packaging by 2030, and to reduce its use of virgin petroleum plastic in packaging by 50% by 2030.

Product innovation is seen as a key way to meet these reduction targets. Carlsberg beer has already developed two prototype green fibre beer bottles as part of its aim to reduce its carbon footprint by 30% by 2030, and now is rolling out a ‘Snap Pack’ to eliminate plastic packaging around its six-pack cans. Likewise, Heineken UK has rolled out its 100% plastic-free cardboard topper which eliminates the need for plastic rings on supermarket packs of beer with the company planning for this to fully replace the plastic rings by the end of 2021.

Apart from as a way to meet targets, recyclable friendly products have become a marketing tool for major brands to promote to increasingly environmentally conscious consumers. Nike recently released its Nike Air Vapormax 2020 FK shoe range which is marketed as being designed with sustainability in mind, and is made from 50% recycled content by weight, and the sole is made from at least 75% recycled TPU by weight.

These targets and trends will naturally impact on demand for virgin plastics from downstream producers over the next decade, and it will be incumbent on downstream participants to find ways to either integrate into these strategies though providing alternative or innovative products which are designed for the whole life cycle of the plastic, or to invest in ways to close the loop through efficient disposal or recycling processes.

Concomitant with consumer and manufacturer pressure to create a more sustainable plastics industry has been the pressure created by increased governmental regulation concerning the manufacture and use of plastics in different jurisdictions. Despite efforts to create uniform action by bodies such as the G7 under Canada’s presidency and the United Nations through its 2018 Report into single-use plastics, generally, measures have been implemented on a jurisdiction by jurisdiction basis. There is a general trend across the globe to tackle the plastics problem with over 127 countries having introduced some form of restrictions on plastics. Generally, the measures fall into the following categories:

The patchwork approach by different jurisdictions makes it difficult to form a uniform strategy, however the common element is that most jurisdictions are aiming to significantly reduce the use of such plastic products.

The European Union has been at the global forefront of introducing regulatory frameworks to deal with plastic waste. Its directives, which must be implemented by member states, have generally introduced consumption reduction targets, and more recently, outright bans on certain products. Each Directive is implemented individually by each member state within a set time period. The most important directives are:

This Directive requires EU member states to reduce their annual consumption of plastic bags to 90 bags per person by 31 December 2019 and 40 bags by 31 December 2025. Measures implemented by member states to achieve this have varied, and have included bans (France, Italy), taxes on consumption (UK, Portugal, Spain) and voluntary agreements with retailers (Austria, Finland, Germany).

Member states have 2 years (from 2019) to implement the requirements of the directive into law.

The United Kingdom has implemented a number of measures to tackle plastic waste. In keeping with the EU Directive, in May 2019, the UK government formally confirmed a ban on single use plastic items such as plastic straws, drink stirrers and cotton buds with plastic stems would take effect from April 2020. The COVID-19 pandemic has however seen this start date pushed back until October 2020. From 2022, the government will introduce a tax on plastic packaging to ‘penalise’ companies if they produce or import packaging which does not contain at least 30% recycled content.

At the consumer level, a levy of 5p must be paid for plastic bags, which has caused the number of bags used to decrease by more than 80% in England since the fee was introduced.

In Russia, climate change and sustainability have become important issues with the government encouraging green initiatives and steadily implementing legislation to enforce them. So far, there has been no concrete action in relation to single-use plastic, however, in mid-April 2019 the Russian State Duma suggested that plastic bags should be banned starting in 2025. Russia’s Federal Consumer Protection Service (Rospotrebnadzor), subsequently announced it was preparing a draft bill on phasing out single-use plastic bags, and it is likely we will see some form of plastic restrictions implemented in Russia in the coming years.

Russia currently recycles roughly 12% of the plastic waste it generates each year, leaving its recycling plants with a lack of raw material. This has led to Russia becoming a net importer of plastic waste, with Russia purchasing approximately $20 million worth of plastic waste from other countries in 2018. With Russia’s federal law in relation to Public-Private Partnerships, the ability to enter into development agreements with federal or regional authorities provides another attractive option to develop such projects. This opportunity is already being exploited by some companies with a number of new thermal power plants being created in the Moscow area which will use solid waste as fuel.

There is no uniform national single-use plastic ban in the United States, however a number of States have unilaterally taken their own action such as California, Connecticut, Delaware and New York which have, or are in the process of introducing measures to limit or prohibit disposable plastic bag use. Conversely, states such as Florida have pre-empted any action being taken by introducing laws preventing towns and cities from introducing any plastics bans. The situation has been further complicated by the COVID-19 pandemic which has resulted in some States such as California temporarily rolling back their plastic bag restrictions for public health reasons.

4. How HSF can assist

HSF is already assisting a number of clients with their transition to decarbonise and reduce their plastics exposure, through many of the measures outlined above, such as through strategic mergers, acquisitions and divestments, through entering into joint ventures for research and innovation, and through navigating the complex and multitudinous regulatory frameworks in different jurisdictions. We have experts on the ground across the world, to assist clients in navigating complex regulatory environments and identifying and exploiting opportunities.