As we have previously noted, there is some uncertainty over whether, following a no deal Brexit, EU27 countries will apply the 2005 Hague Convention on Choice of Court Agreements where an exclusive English jurisdiction clause was agreed before exit day. This is sometimes referred to as the change of status risk, and it arises because the Convention applies only to exclusive jurisdiction clauses agreed after the Convention came into force for the chosen state. The UK is currently a party to the Convention by virtue of its EU membership, but that will cease on exit day and the UK will then re-join in its own right. As things currently stand, following the recent delays to Brexit and the UK’s resultant suspension of its accession to the Convention, the UK will re-join with effect from 1 November 2019.

The question therefore is whether EU27 countries will treat the Convention as having been in force for the UK since 1 October 2015, when the Convention came into force for the EU generally, or only from when it re-joins on 1 November. In the latter case, the Convention will not apply to exclusive English jurisdiction clauses agreed before that date, and therefore the recognition of such clauses and the enforcement of resulting English judgments will be a matter for domestic law in each EU27 country. In those circumstances most (but not necessarily all) EU countries are likely to enforce English judgments in many circumstances, but the type of judgment enforced may be more limited and the procedures involved more time-consuming and costly.

The change of status risk appears to have been heightened by recent guidance issued by the European Commission concerning civil justice in the case of a no deal Brexit. The guidance is not entirely clear, but it seems to suggest that the Commission’s view is that the Convention will not apply to exclusive English jurisdiction agreements concluded before exit day. This is not of course conclusive – it could be that national courts in the EU27, and ultimately the CJEU, will adopt a different interpretation. However, it is obviously unhelpful to parties who are entering into exclusive English jurisdiction clauses now, or have done so since 1 October 2015, and would wish to obtain the benefit of the Convention in the event of a no deal Brexit.

We have updated our decision tree on enforcement of English judgments in the EU27 post-Brexit (which was first published on 26 March 2019) to reflect the recent delays to Brexit and the UK’s accession to the Hague Convention. Please click on the image below to access the document. 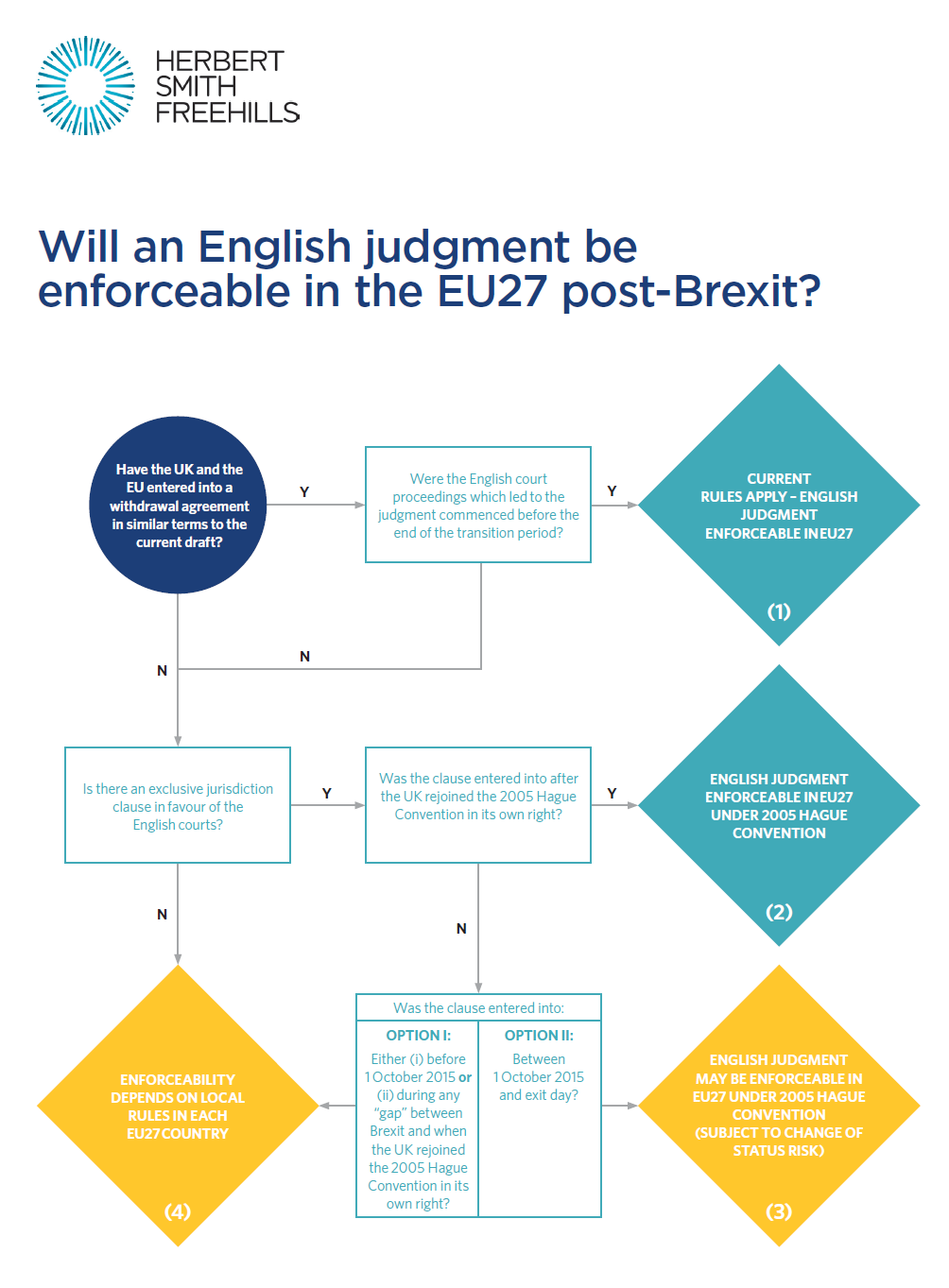