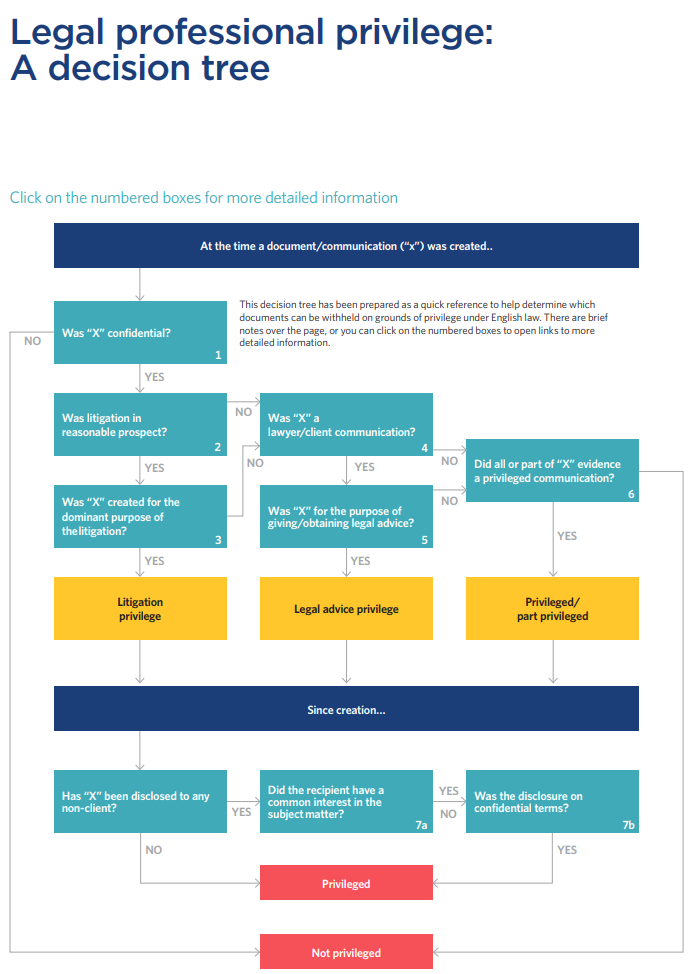 However, what amounts to “legal advice” for these purposes is broadly interpreted. That point was clarified by the House of Lords in Three Rivers No 6 [2004] UKHL 48. The claimants sought disclosure of the Bank’s lawyer/client communications relating to the way in which the Bank’s evidence was to be presented to the Bingham Inquiry. The claimants said this sort of material was merely “presentational” rather than “legal” advice and so was not protected by legal advice privilege. The Bank argued that legal advice should be interpreted widely so as to cover all advice and assistance from their solicitors or counsel relating to the evidence to be submitted and the submissions to be made to the Inquiry on behalf of the Bank.

The Court of Appeal held, in summary, that legal advice privilege protects advice as to legal rights and obligations but does not include “presentational” assistance in putting relevant factual material before an inquiry in an “orderly and attractive fashion”.

It is clear that not all communications between a lawyer and client are necessarily subject to legal advice privilege.

As Lord Scott said in Three Rivers No 6, “If a solicitor becomes the client’s ‘man of business’, and some solicitors do, responsible for advising the client on all matters of business, including investment policy, finance policy and other business matters, the advice may lack a relevant legal context.” In marginal cases (which this was not), the judge should ask whether the advice relates to the “rights, liabilities, obligations or remedies” of the client under private or public law. If it did not, then there would be no relevant legal context, and so no legal advice privilege. If it did, then the question was whether the occasion on which the communication took place, and the purpose for which it took place, were such as to make it reasonable to expect the privilege to apply. Applying this test, Lord Scott said that in his view privilege would be available to anyone who believed himself or herself to be at risk of criticism by an inquiry, since the “defence of personal reputation and integrity is at least as important to many individuals and companies as the pursuit or defence of legal rights…”

Lord Roger expressed the test somewhat differently as “whether the lawyers are being asked qua lawyers to provide advice”, or whether they were being asked to “put on legal spectacles”. And in Jet2.com, the Court of Appeal emphasised that the privilege will not apply where the dominant purpose of a communication is to seek commercial input rather than legal advice.

In order to benefit from legal advice privilege, a lawyer / client communication does not need to contain actual legal advice or an express request for such advice. The protection is broader than this. In general terms, so long as there is a relevant legal context, the privilege will cover communications which form part of the ordinary flow of information and instructions between lawyer and client relating to the matter on which the lawyer is instructed. As emphasised in Jet2.com, referred to above, a particular document will not be privileged if it falls outside that legal context, but in general terms the protection remains broad.

In Balabel, referred to above, the Court of Appeal noted that in most solicitor / client relationships there will be a continuum of communication and meetings, and said: “Where information is passed by the solicitor or client to the other as part of the continuum aimed at keeping both informed so that advice may be sought and given as required, privilege will attach.”

In Property Alliance Group Limited v The Royal Bank of Scotland Plc [2015] EWHC 3187 (Ch), the High Court confirmed that legal advice privilege will protect not only legal advice, but other information communicated from the lawyer to the client (or vice versa) to enable the lawyer to advise and the client to make informed decisions in a relevant legal context. This may include references to matters in the public domain or to meetings and correspondence that would not, in themselves, be privileged – see “High Court confirms legal advice privilege can include lawyer’s summary of facts” (5 November 2015).

It seems a client’s contact details may be protected by legal advice privilege if they are communicated between lawyer and client in confidence for the purposes of seeking and receiving of legal advice: JSC BTA Bank v Ablyazov and others (Defendants) and Addleshaw Goddard LLP (Respondent) [2012] EWHC 1252 (Comm) – see “Disclosure of client contact details: conflicting approaches” (11 June 2012).