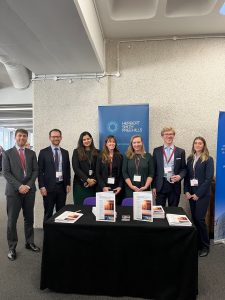 The London Conference on International Law was held over two days on 10 and 11 October in London. It brought together international law practitioners, academics, judges, representatives of government and civil society and others from around the world. The theme of this year’s conference was “States in Emergency – International Law at a Time of Reckoning“. Four plenaries and 12 panel sessions covered an array of topics, including climate emergency, investor-state dispute settlement, human rights, international criminal justice, security, cyber warfare, jurisdiction at sea, sanctions and ethical challenges for practitioners.

Day 1 opened with introductory remarks by Rt Hon Lady Arden of Heswall DBE, former Justice of the UK Supreme Court and a conversation with Judge Yuji Iwasawa, Judge of the ICJ, followed by six panels. Christian Leathley, Global Co-Head of the Public International Law Group, Head of the Latin America Group, and US Head of International Arbitration, spoke on a panel titled “Investor-State Dispute Settlement and States in Emergency“. Christian discussed whether state intervention could trigger state responsibility in the context of public health emergencies like Covid-19. This included an overview of the types of measures that could be the subject of claims (e.g., containment and health system measures, compulsory licenses, suspension of contracts, fiscal intervention, trade restrictions and mandatory occupation of buildings). Christian also discussed the defences and arguments states could seek to rely on, raising thought-provoking questions from the audience. Day 1 closed with a discussion between Professor Antonios Tzanakopoulos and Professor Christine Chinkin CMG FBA on the definition of ‘crisis’ and the obstacles to recognising and addressing crises. A common theme across the conference was the acknowledgement that, at any given time, a wide variety of crises exist across the world and that, in some ways, international law is a discipline of crisis.

At the conference dinner, Sir Christopher Greenwood GBE CMG KC addressed attendees on the capacity of existing international law to address new challenges, and emphasised the ongoing importance of speaking truth to power.

Herbert Smith Freehills exhibited its latest compendium of publications on issues of international law which was very well received by attendees and prompted interesting discussions on our business & human rights and climate change practices.