Covid-19 and restrictions on enforcement: where are we now?

In March 2020, the Government introduced unprecedented measures which restricted a landlord’s ability to pursue remedies for recovery of arrears (but also breaches of other covenants), should a tenant fail to pay the rent due under its lease. These measures were always stated to be temporary in nature, and aimed to provide tenants with “protection and flexibility in managing their finances” and “to encourage creditors to show forbearance to businesses affected by [Covid-19]”.Those restrictions have been introduced piecemeal, and some apply only in their capacity as landlords, others restrict the actions that all creditors (including landlords) may take against debtor companies.

On 16 September 2020, after much speculation, the Government announced that it would retain some of the protections afforded to commercial tenants beyond the date on which those protections were due to expire (30 September 2020) until 31 December 2020. The practical effect of the extension of the protection period is that landlords cannot generally seek to take back premises let to tenants based upon forfeiture for non-payment of rent until the beginning of 2021. This will have an impact on any rent concession and restructuring discussions between landlords and tenants, and will encourage landlords to reconsider the other enforcement options which remain open to them to recover arrears (more on this below).

Additionally, last week the Government announced that it would also supplement its protection of all debtors (not just tenants) by continuing to restrict the effect of service of statutory demands and preventing creditors (including landlords) from presenting winding-up petitions for an additional three months, so also until 31 December 2020.

Up until 20 September 2020 there had been an additional problem for landlords, because the Court rules were also changed to prevent the progression of any claim for possession. This meant, in practical terms, that forfeiture for tenant breaches other than non-payment of rent were theoretically possible but could not be enforced through the Courts. Since 21 September 2020 this obstacle has been removed, so landlords can consider claims to forfeit leases for non-rent breaches.

The table below lists the enforcement rights of landlords which have been subject to restrictions, what those restrictions involve, and when the restrictions will expire. 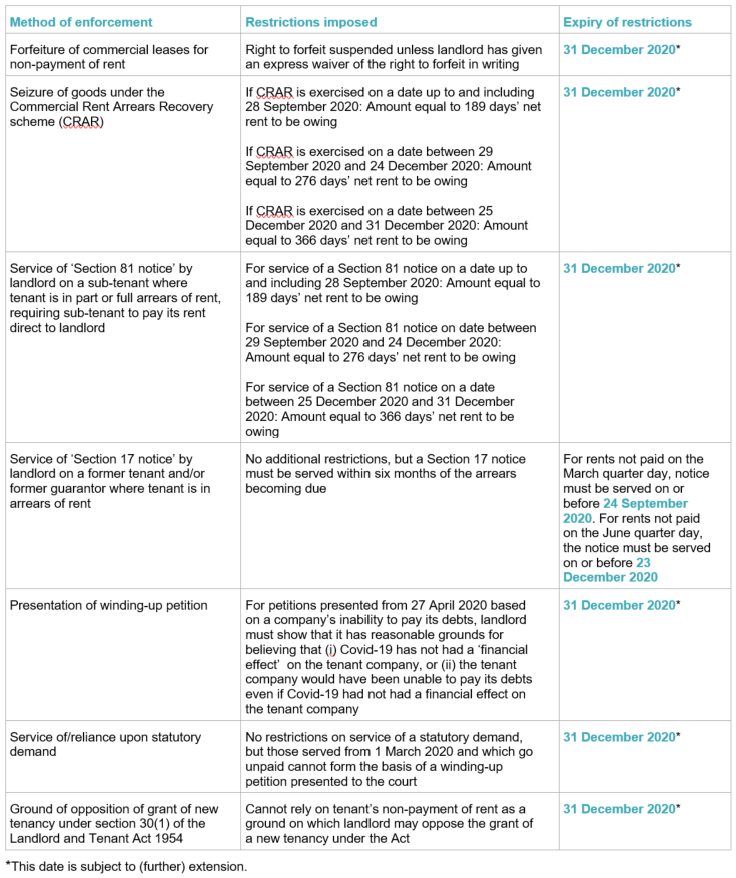 At present, the legislation does not limit a landlord’s right to pursue other remedies should a tenant fail to pay any sums due under its lease (or as set out in any rent concession arrangement). Other key enforcement measures still available to landlords either individually or in combination are:

As well as preserving these options for landlords, the Government has encouraged landlords and tenants to “act in good faith”, and, where possible, comply with the Code of Practice issued in June 2020. The Code, which will apply until June 2021, is voluntary, seeks to provide a framework by which landlords and tenants can reach compromise arrangements on the level and frequency of payment of rent, service charge and insurance contributions, and sets out underlying principles which each party is expected to adopt during those discussions. It does not change the underlying legal relationship between landlord, tenant and any guarantor, or the terms of their leases. It is possible that compliance will be deemed influential by courts for example when dealing with landlord claims, for example when making any award of costs.

Against this background, commercial landlords across many sectors are experiencing increased voids and non-payment by tenants, large and small. However, commercial landlords are businesses too, and will face their own difficulties, not least complying with their lending covenants and maintaining their cash flow. Will the Government, in time, consider protections for them? 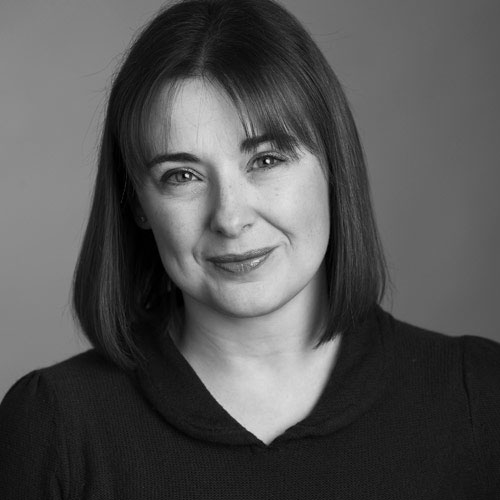